You are here: Home / News / AAHD Co-Sponsors Save Medicaid Rally

Yesterday, AAHD was one of several disability organizations to co-sponsor the Save Medicaid Hill Day and Rally. The rally was attended by several senators who spoke about the importance of the Medicaid program. The Consortium for Citizens with Disabilities (CCD) which is a coalition of national disability organizations released the following press release regarding the events of the day. 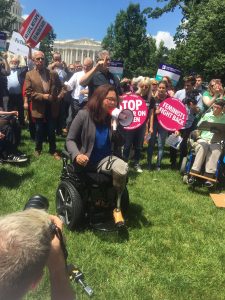 June 6, 2017, Washington, DC—Today, Senators Casey, Wyden, Van Hollen, Duckworth and Hassan joined hundreds of advocates, families and providers from across the country to demand that the Senate stop the Medicaid cuts and caps that are currently included in the American Health Care Act (AHCA).   In addition to the rally in Washington, DC, there were coordinated events and actions that took place across the country.  For a complete list, go to https://medicaid.publicrep.org/feature/june-6th-actions/.

Ten million people with disabilities rely on Medicaid for the critical services that help them live, work, attend school and participate in their communities.   The AHCA, if passed, will cut more than $800 billion from Medicaid over the next decade.  The lives of people with disabilities relying on home and community based services will be decimated by the AHCA’s proposed Medicaid cuts and “per capita caps.” 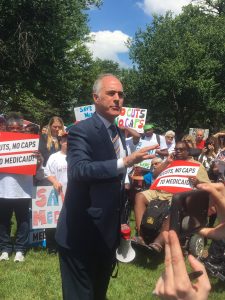 According to Senator Bob Casey (D-PA), “Medicaid cuts will harm children, families, people with disabilities, veterans, and aging Americans. It is wrong to cut the essential services so that the rich can receive a massive tax cut. I will work to keep Medicaid whole and keep services flowing.”

Cindy Jennings of Lititz, PA said, “My son Matthew is why I’m here, fighting against cuts to Medicaid.  Matthew and I have a lot in common—we both work and are active in our community.  Our life, which is probably a lot like yours, is possible because of Medicaid.  Matthew’s disabilities require supports that give him dignity and independence and, without his Medicaid-funded services, I couldn’t work and provide for our family.  Medicaid makes all the difference for our family and thousands of families across the country and I won’t let Congress take it and all the progress Matthew has made away.”

According to Kim Musheno, Chair of the Consortium for Citizens with Disabilities, the largest national coalition of disability organization in the country, “Today’s rallies and actions across the country send a clear message to Congress that the entire disability community and our allies are united in opposition to Medicaid cuts and caps.  The lives of millions of people with disabilities and their families literally depend on Medicaid.  Billions of dollars in cuts to Medicaid would decimate our country’s community support system and put people’s lives at risk.”

The Save Medicaid activities that occurred around the country were sponsored by the following organizations:

Special thank you to NDNRC Partner, the Association of University Centers on Disabilities (AUCD) for the photos used in this story.

The Medicaid continuous coverage requirement will end on April 1 at which point, many may find … END_OF_DOCUMENT_TOKEN_TO_BE_REPLACED

PHE ENDING IN MAY Earlier this week, the Biden Administration announced that the Public Health … END_OF_DOCUMENT_TOKEN_TO_BE_REPLACED