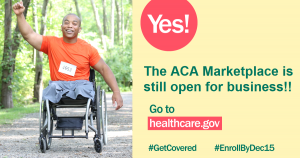 Two things should be noted about this decision: first, it will almost certainly be appealed and will probably end up at the Supreme Court for a decision. Second, it will have no legal affect while these appeals go through so the ACA marketplace is still open for business. As today is the last day to enroll in many states (see yesterday’s blog for some exceptions), do not let yesterday’s court ruling deter you from enrolling in health insurance!