You are here: Home / Blog / ACA Anniversary Countdown: 3 Days Until the ACA Turns 10

This is the eighth in a series of blog posts celebrating the benefits that the Affordable Care Act (ACA) provides to people with disabilities. For the full list of prior and upcoming blog posts, see last Friday’s news item.

The ACA Expanded Eligibility for Medicaid

Prior to the ACA, Medicaid eligibility varied greatly from state to state and people with disabilities who wanted access to services through the Medicaid program had to fall into an eligibility category determined by the state. In addition, there were income and asset tests which made it very difficult for individuals to qualify. However, many people with disabilities required the services provided by Medicaid as Medicaid is the largest payer for long-term services and supports. Given the stringent income tests required by Medicaid, many people with disabilities were forced into a scenario where they needed to apply for disability benefits as a way to qualify for Medicaid. This phenomenon is referred to as “Health Insurance Motivated Disability Enrollment” (HIMDE). As a result of HIMDE, many individuals with disabilities would choose to receive disability benefits in order to enroll in Medicaid and were reluctant to join the workforce for fear that they would lose their Medicaid benefits.

The ACA created a new path to Medicaid eligibility by tying it solely to income (not assets) and increasing the income levels to 138% of the Federal Poverty Level (FPL). For example, in 2020 a person with a disability who is single could still earn up to $17,236 and still qualify for Medicaid. This expansion of the Medicaid program is such an important part of the ACA for people with disabilities as it provides greater flexibility to the disability community in seeking employment as they are able to earn up to 138% of FPL and still stay on Medicaid or even acquire a job with employer-based insurance without the fear of losing coverage if they subsequently lose the job as then they would be able to reenroll under the Medicaid expansion and not have to re-qualify under a disability criteria.

No longer do people with disabilities need to worry about losing Medicaid with their disability benefits if they return to the workforce. Prior to the ACA, if an individual with a disability lost their job and with it their employer-sponsored health insurance, they faced the potential reality of not having health insurance coverage which, for someone with complex medical needs, could be potentially devastating. The Medicaid expansion took away that fear for those individuals who lived in states where Medicaid had been expanded as they knew they would be able to fall back on the Medicaid expansion for coverage should they lose their job and any employer-sponsored plan.

This new flexibility has been shown with research which showed that employment rates for people with disabilities in states where Medicaid had been expanded was higher than in states that had not expanded Medicaid. The research shows that the employment rate for individuals with disabilities who were living in expansion states increased from 41.3% in 2013 right before the Medicaid expansion to 47% in 2017. Unemployment rates also dropped from 32% in 2013 to 27% in 2017. If you want to read more about this research or link to the article, you can check out our prior blog post. 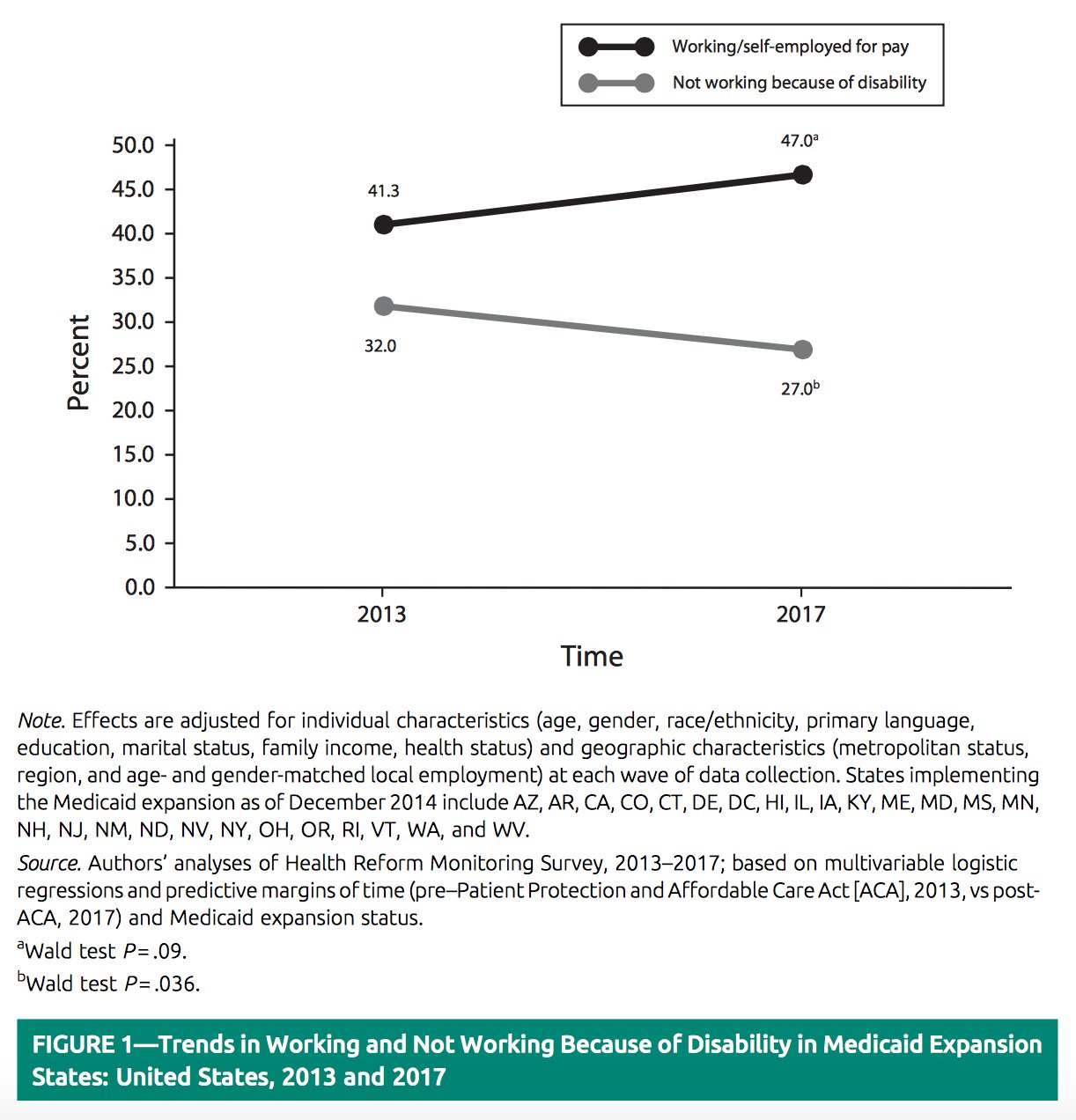