One of the final acts of the Trump administration was the release of part of the final Notice of Benefit and Payment Parameters (NBPP). At the end of November, we had a news item on the proposed NBPP and in a prior newsletter, we highlighted a comment letter which AAHD joined expressing concerns about some of the proposed changes. Links to the final rule, CMS press release and fact sheet can be found in our news item. It remains unclear at this time what, if anything, the new Biden administration will do to potentially change anything in the final NBPP.

To learn more about what’s included in the final NBPP, check out the blog post from Health Affairs. Health Affairs also has another blog post which addresses the new lawsuit challenging Georgia’s 1332 waiver. This waiver would allow Georgia to run a marketplace which would bypass the healthcare.gov and use direct enrollment sites which would not be centralized as they are in other state-based marketplaces.

Prior to CMS’s release of the final NBPP, the Georgetown University Center on Health Insurance Reforms released a blog post outlining some of the comments submitted by insurers about the proposed rules.

Last week, we highlighted the fact that Congress’s year end omnibus funding bill included the “No Surprises Act” which is intended to protect consumers from receiving surprise medical bills from providers who are out of their network. We highlighted some resources on the new legislation in last week’s newsletter. Here are some more resources to learn about the new law:

While Open Enrollment Year 8 (OE8) ended in December for most, there is still an opportunity for some people to enroll in health insurance for 2021. Some states run their own state-based marketplace (SBM) and have a deadline which still allows people to enroll in coverage. Six states with a SBM are still open and allowing people time to complete their enrollment, and in two SBM states, OE8 ends this weekend (Massachusetts & Rhode Island). For a complete list of all the state deadlines when their open enrollment ends, check out our blog post.

While open enrollment may not be going on in your state, Medicaid enrollment is available all year long. AAHD has a project where we are working with Community Catalyst and other partners in conducting outreach to educate individuals about health insurance enrollment through the ACA Marketplace and Medicaid. This outreach includes graphics like the one below which highlight Medicaid’s year-round enrollment. These graphics are available in the Community Catalyst Outreach Hub. 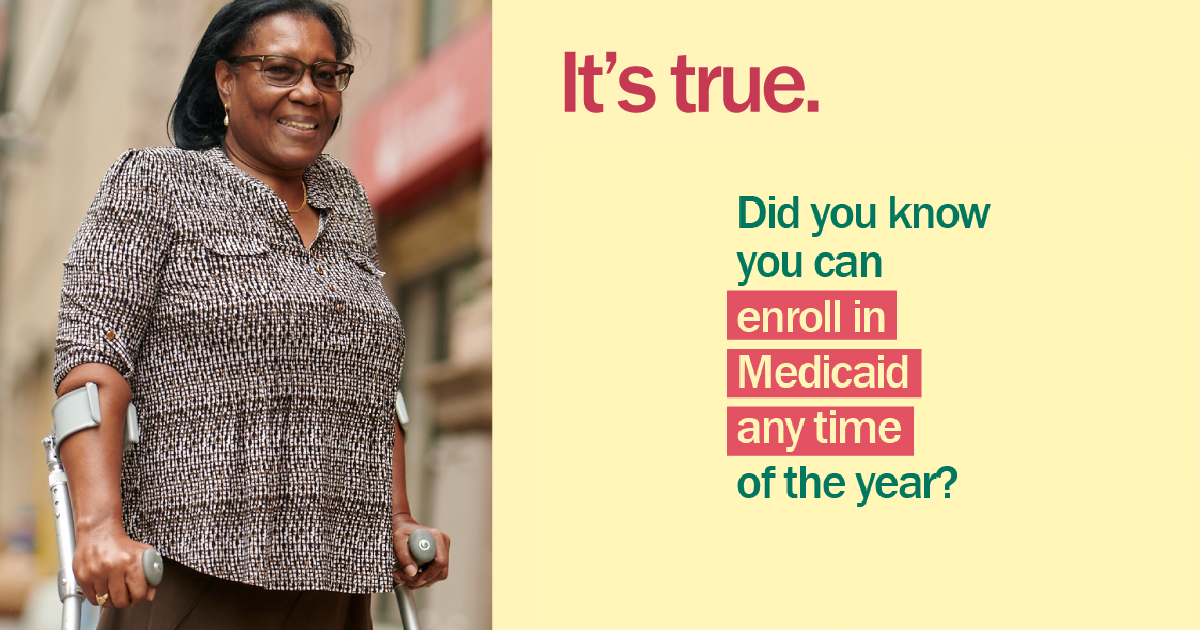 Speaking of Medicaid enrollment, earlier this month we announced a new project in partnership with Community Catalyst in which we will be conducting Medicaid outreach to raise awareness about the potential enrollment in the program for individuals without health insurance. If you want to learn more about the Medicaid Outreach Partnership, check out our blog post.